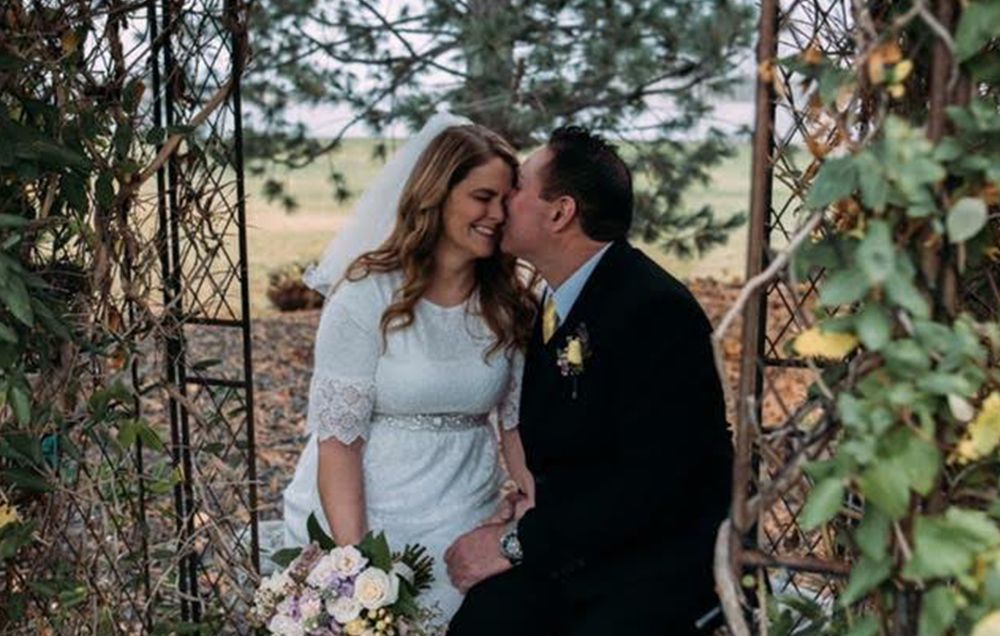 The week before that fateful day, I was feeling pretty good about my life. Several years prior, I’d escaped an abusive marriage, put myself though nursing school, graduated with my R.N., and gotten a great job as a nurse. My five kids were adjusting well. And, after three years of being divorced, I’d finally met someone I could see myself being with forever.

Sure, things weren’t perfect. I’d recently gained about 15 pounds, and the previous couple of months I had been experiencing some mild bloating. But I wasn’t too worried. I chalked the weight gain up to working night shifts and the bloating just felt like what happened every month during PMS. The only problem was that this bloating never went away.

I put all of that out of my head though because my boyfriend, Gabriel, and I were taking a trip to Lake Havasu, Arizona, so I could meet his family and see my brother’s newborn twins. As soon as we got to Arizona, I started to feel really sick. The bloating became intense—I suddenly looked eight months pregnant—and I knew something was really wrong.

At first, I thought it was a partial bowel obstruction. It’s pretty common for your bowel to get blocked up after flights and a change of eating habits. So I went to the drugstore and loaded up on prune juice and laxatives, determined to make myself poop. But after two miserable days of being in pain, it became clear I wasn’t going to fix this on my own. Despite my protests, Gabriel and his mom made me go to the hospital. (Nurses make the worst patients sometimes!)

The Diagnosis
At the hospital, the doctors ran a ton of tests and discovered the source of my now-extreme bloating was “ascites”—an abnormal accumulation of fluid in the abdominal cavity. The most common cause of ascites is cirrhosis of the liver from alcoholism or heavy drinking. But because I had never had a sip of alcohol in my life, I knew I was in for some really bad news.

The doctor ordered a CT scan and found two large tumors on my ovaries and a foot-long tumor in my gut. On October 15, 2017, I was diagnosed with metastatic high-grade serous carcinoma Stage 4 ovarian cancer. I didn’t ask for a prognosis. Being a nurse, I knew my odds: I have a 17 percent five-year survival rate.

I was absolutely devastated by my ovarian cancer diagnosis. I’m 42, far too young to have cancer! Gabriel, his mother, and I held each other and cried. Part of what was so devastating was that I’m a medical professional, yet even I didn’t spot the signs—what few of them there were. Looking back, the weight gain was unusual and I’d had to pee more than normal. But the rest of my symptoms—like the bloating—were all so mild it never occurred to me that they might be serious. That’s the worst part about ovarian cancer, how sneaky it is.

I was also terrified. How was I going to explain this to my children? They’d just had their world torn apart by the divorce and their father choosing not to be in their lives anymore, and now they could lose their mother, too? I grieved for them, for me, for my new relationship, and for the loss of everything I’d just built.

Later that evening, Gabriel told me to put on a dress, that he had a surprise for me. He took me for a walk at a nearby national park, and then he knelt down and proposed to me saying that he wanted nothing more than to be my husband no matter what happened. He’d been planning to propose to me that weekend all along and said that my ovarian cancer diagnosis didn’t change a thing about how he felt for me. I said yes, of course. It was October 15, 2017, and I was engaged to the love of my life. It was the best day of my life.

Living With Cancer
We flew home to Washington state and immediately started planning the wedding. I wanted to get married as soon as possible because I didn’t want to be a bald bride! Plus, we were going to have to work around my treatments. I had surgery on November 6 to remove as much of the tumors as possible and I knew I’d have to start chemo as soon as I was recovered from that. I’d decided I was going to just do something small in my living room with our families, but my oldest daughter and my best friend decided to throw us a wonderfully grand surprise wedding and we were married just over a month after my diagnosis, on November 25.

The day was absolutely perfect. I found a beautiful dress online for just $50. We wrote our own vows and my oldest son got ordained online and was the one to marry us. All my siblings and their families had come down for the wedding, which made the day even more glorious to me. I was with the man I loved, surrounded by everyone I loved.

Back home in Washington state, I started chemotherapy on December 8. So far, I’ve done three of the planned six treatments and my body seems to be responding well. (Fun fact: Because I carry the BRCA1 gene, chemo actually works better for me than it does for people without it.) I got a serious infection after my second treatment and that felt horrible, but other than that, I don’t feel too sick. My side effects from the chemo are pretty mild, mostly nausea, fatigue, bone pain, neuropathy, taste changes, and blurry vision—and of course I’ve lost my hair—but they’re nothing I can’t handle. I’m rocking the buzz cut if I do say so myself. Plus, my husband shaved his head along with me in solidarity. How great is that?

My CA125, a blood marker associated with some cancers, is down from 2250 to 56.9, so that’s encouraging. I have a CT scan scheduled next week to see if my tumors are shrinking. (Fingers crossed!) Even when I do experience bad pain, I can’t hate it—I’m just so grateful I’m still alive to feel it.

People ask what’s next, and honestly I don’t know. Right now I’m just focusing on taking things one day at a time and savoring all the little moments. I’m still broken-hearted about the cancer, but I’m not giving up. I’m not a statistic. My body is young. It is strong. I still cry, but I must live—and I’m more determined than ever to build my beautiful life.

Special Thanks to Mrs. KIM ZIRKER for sharing her story with us.